Warnings: Leaving a child in the car is illegal and greatly dangerous

Picture this; you need to get some cash from the ATM, opposite to the street your own. Yeah, we’ll all leave the child in the car for a couple of minutes, get our cash, drive home and all’s good right? Well not right. Leaving a child in the car is illegal and greatly dangerous for her/him. Summers hot in the UAE and the temperature goes around 40-50 degrees, but no matter what the weather, do NOT ever leave your child alone in the car.

The temperature of your car doesn’t go along with the temperature outside. A car can get up to 20 degrees in 10 minutes even in ice cold weather, eventually it increases to 40 degrees in 20 minutes and so on. A car may get heated but the heating of the child is even more dangerous. Hyperthermia or heat stroke can kill easily; it disrupts the organs and the internal system. Knowing that, a child’s body temperature rises up 5 times faster than adults. Now imagine how dangerous that would be, along with the fact that a child doesn’t have the brain to know what to do, when in this condition. 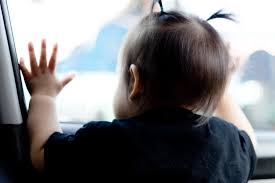 Many kids die from hyperthermia which they get by being stuck in a car, whether it is forgotten in the car, left intentionally or just playing hide and seek; it’s a big NO for kids.

It’s against the law as well, leaving a child in a car can get you many penalties and if god forbid, the child dies, then you can expect fines and even jail. If you see a child in a car, immediately call 911.

Here are some tips to help avoid hyperthermia:

According to ‘Kids and Cars, more than 600 children have died since 1990s due to being left alone in a locked car. Major Abdullah Ali Mohammad, Director of Land Rescue at the General Department of Transport and Rescue stated that in the UAE, his department managed to rescue over 137 children left unattended in parked vehicles in 2015. That’s a lot!

Now you know how dangerous it is leave your child in the car, NEVER do that. As far as we know, the temperature of UAE is never down and as we know the heat conditions of the car, leaving a child in the car in UAE just increases the danger and nothing else. When you get home and you do find your children sleeping, don’t leave the windows open and leave them in the car thinking they will come in by themselves when they wake up. This has happened to most of us and make sure it never happens again. Again, if you do see a child in a car, call 911 and you could save a life!